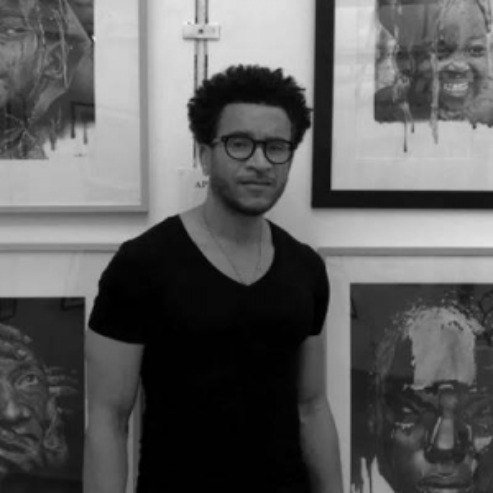 My name is Lucien Pinaud-Betzy. Self-taught painter born on August 7, 1969 in Fort de France in Martinique.

I have always drawn. At the age of 11 I was spotted by my teacher who introduced me to a TV host because I was sculpting historical figures (Victor Hugo, Abraham Lincoln…) as well as certain objects (violin…) in chalk bars. I was on the program “l’arbre à palabres” with a famous writer, Henri Corbin, and a great visual artist, Hector Charpentier.

In 1985 I won the national competition of all the high schools in France for the design of a poster for the 100 years of written expression.

In 2006 I decided, after studying accounting and working for a few years, to make a collection to present to galleries.

February 2007 . Collective exhibition at the “SINCE” under the theme Joe the Artist in Lyon

May 2008 . Exhibition at Unesco: African days

March 2010 . Exhibition at the Daniel Sorano space in Vincennes

– May 23 Art’uel, the painters’ market in Ruel Malmaison on the Island of the Impressionists

September 2011. Exhibition at the Embarcadère – Lyon.

December January 2013. Personal exhibition at the “Since” – Lyon

February 13 to March 5 . Group exhibition at the Thuillier gallery – Winner of the press prize

May 4 to June 12 . Group exhibition at the Parc Floral de Vincennes “The circle of artists of Paris” – Winner of the public prize.