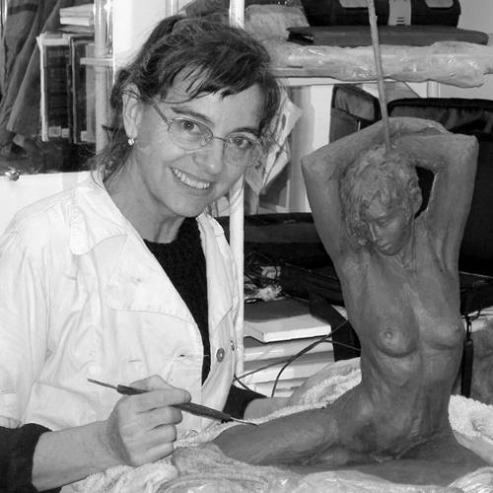 Nella Buscot was born in Montpellier to a father who was a professor of Physics and Chemistry and a mother who was a violinist in the Montpellier orchestra. She spent her childhood in Béziers and completed her university studies in Montpellier. She successively obtained the State Diploma of Pharmacist, a State Diploma of Audioprosthesis and a University Doctorate in Pharmacy. She then became an editor for the magazine “Les Actualités Pharmaceutiques”.

After the birth of her son, Nella started to paint with oils, then with pastels. Discovering by chance a piece of clay at a potter’s, she started to model small busts. Sculpture was a real revelation for her. Perfectly self-taught, she gradually abandoned painting, then pharmacy, to devote herself exclusively to this art that had become a passion.

To note the realization for public places:

Nella Buscot also gives conferences on the technique of sculpture, “from clay to bronze”, on “Camille Claudel, a woman sculptor”, on “women sculptors of the 19th century”, as well as on the realization of the monumental sculpture of Palavas-les-Flots.