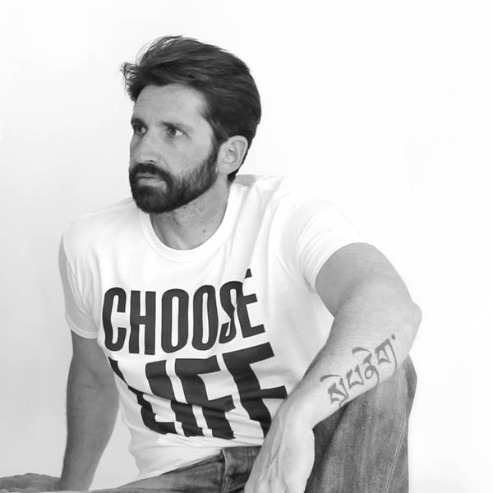 Sculptor & visual artist… Cyril Maccioni is all that.

With others, he embodies this new generation of Corsican artists who value the identity of his works while bringing this undeniable contemporary note.

It is at his youngest age that Cyril discovers a passion for creation. Already, he imagines, creates, transforms and diverts objects from their original function to make unique pieces; then he moves on to the next. Graduated from the University of Corsica, successively fireman and professional model, his inspirations are nourished by his land, Corsica, and his travels around the world. Throughout his experiences and encounters, he keeps in mind his dream: to devote himself fully to creation.

This dream he touches it with his fingertips in 2010 when he begins to develop his own workshop.

There he devotes himself to the creation of sculptures. For this he manipulates and assembles materials that have long fascinated him: concrete, wood, steel, composite materials …

Cyril Maccioni imagines, designs and produces his own projects from A to Z and each of his creations exists in a single copy, even if he recently allowed himself “original prints” but, true to himself, always designed as unique pieces.

Sensitive and curious, Cyril Maccioni is a free artist who sets no limits on his creative approach.

His creativity, generosity and humility have allowed him to establish himself, in a few years, as one of the most talented Corsican sculptors of his generation.

ANOTHER IDEA OF ART…

Minimalism, authenticity, uniqueness: a vision of art that is both respectful of an identity and resolutely turned towards the future.

The artist and his approach

The color black is a call for reliefs, indentations, grooves in the black matter that reveal light and reflections. For it is not the color black itself that is at the center of his work, but the light it reveals: it is therefore a matter of accessing a symbolism that goes beyond color, a kind of beyond black.

The matter for the sculpture is all at once, changing and vibrating immaterial which does not cease transforming itself according to the angle by which one approaches it.

It needs relief and thickness to create. It is the movement which determines the form.

What he tries to render is the sense of movement. His instinct guides him. His mind is inspired. His hands create. The artist’s work is all about contrasting volumes: strength and softness, solidity and fragility.

By immersing himself in his representation of the suffering animal, the artist evokes in his own way the mistreatment inflicted on the latter, he chooses to do so through the image, which through the intermediary of the color black and the reflections that it generates, will highlight the animal sacrifice.
The artist shows us in fact, by the choice of depriving them of their eyes, that these animals have sacrificed a part of themselves in order to make us react to their condition, and thus convince us of the evil that we inflict on them, and by the same token, points to the paradox of our society based on the image.

The paradox of the image, the use of the word “reflection” in both senses of the term (reflection and thought) and the question of sacrifice revealed by the color black, “transcend the material” is primarily the result of an introspection of the artist, and whose purpose is an exhortation to acuity.