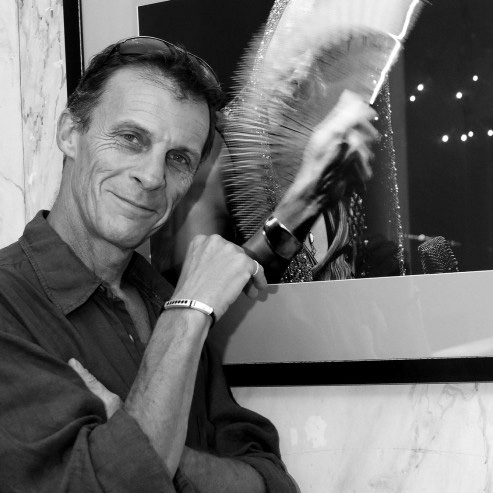 First real contact with photography in 1985 at the Cannes Film Festival and first photos sold to REUTERS and AP agencies. In March 1990, he went to Romania for Médecins du Monde, the photos were “shocking” and were sold to agencies in Paris. He really starts to work as a photographer in 1992, and since then, accredited, he joins the professionals on the steps of the Palais du Festival.

The years follow one another like the life of Cannes and the Côte d’Azur that he regularly covers. Today, as a freelance photographer, he works for various magazines and press agencies, international conventions, communication, local authorities and regional press.

In 2006, his photos of the Cannes Film Festival “HURRY CANNES” were exhibited for the first time in Fréjus (Villa Aurélienne), in 2007 at the Adventure Film Festival of Valencienne (Gaumont cinema) and the same year at the festival “Transphotographiques de Lille” and joined the collection of the House of Photography of Lille, as well as in 2008 at the festival “Transfotografia” of Gdansk (Poland).

For nearly twenty years, he has been present and accredited on the jazz festivals of Antibes – Juan Les Pins or Nice. His exhibition “SO JAZZ” was presented in Fréjus (Villa Aurélienne), at the festival “Les Nuits Photographiques de Pierrevert” and at the HSBC bank in St Raphaël.

Since 2011, he is the artistic photo advisor of the Villa Aurélienne of Fréjus and organizes in collaboration with the city of Fréjus the first festival of photographs “Très en Vues”, the first edition having taken place in

October, where his exhibition “Vietnam – instants complices” was presented at the Espace Culturel Paul Vernet.