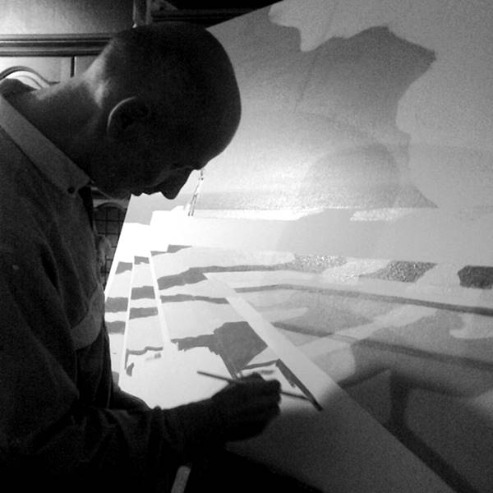 “Painting is not just for beautifying a wall, it is also for questioning.”

Known for his uncluttered landscapes in captivating blues, Hugo Pondz is a Belgian-born painter born in 1975.

With a father who was an antique dealer and a mother who handled the brush herself, art has always been very present in Hugo Pondz’ life. However, it was only at the age of 28 that painting became a vocation for him, when he met Jean-Pierre Hubert who introduced him to the surrealist world, to the technique of old-fashioned painting and to the chemistry of colors “that far too many painters leave aside”.

Various influences: from Hopper to Chirico

Among his inspirations, we find in the work of Hugo Pondz the influence of the American painter Edward Hopper as well as that of the Italian Giorgio de Chirico, whose melancholic and minimalist universe marked him young. Affectionate with emptiness, architecture and large spaces, the Belgian artist takes up all of Chirico’s legacy and expresses it according to his own vision. Generally placing a character at the center of his work, he likes to divert his protagonist from certain works, such as personal photographs, to give him another life on his canvases.

A questioning on our time

Hugo Pondz is a painter of his time, of which he intends to be the echo, as shown by his series “The First Key” on the events of September 11, 2001. According to him, painting should not fulfill a purely aesthetic function and be reduced to the simple role of an object, but should also invite us to reflect on the events that have marked our time. This series, which is finally the one that best represents his vision, questions our relationship with the media and aims to denounce all forms of manipulation of the mind.

“Hugo Pondz, is a regular visitor to New York in his dreams and is interested in both the urban landscape of the city and the empty and forgotten places.

The characters are either waiting or dreaming and perhaps both. There seems to be a war between shadows and light.

The objective is simple: to create paintings that give a strong impression of places in which time remains on hold, ….

In terms of important influences, he admires the work of the American artist Edward Hopper and Giorgio de Chirico.