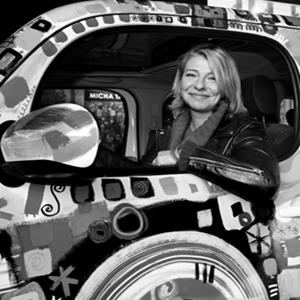 Micha Tauber, an artist of Dutch origin, was born in 1967.
She studied at the University of Fine Arts in Trier, Germany in 1987.

Micha Tauber then moved to France in 1988.
In 1992, Micha Tauber graduated from the Ecole Nationale Supérieure des Arts Appliqués et des Métiers d’Arts in Paris and then entered the Atelier National d’Art Textile.

If there is one term that must define the artist’s approach, it is the word Timeless, which opens onto an imaginary world based on the universe of dreams, a world where it is a question of sensuality, magic, fairy tales …
Escapes, journeys in the unconscious or in the memory, in distant and imaginary civilizations.

The eye discovers reliefs, collages, inclusions which incise the matter. One wonders about these fragments of stones, a point of support which installs abstract forms and volumes which will evolve towards a united whole.

Micha Tauber’s painting then becomes a more poetic reality, we try to gather our memories to guess an ethnic group, an influence… In vain… The seductive mystery remains.