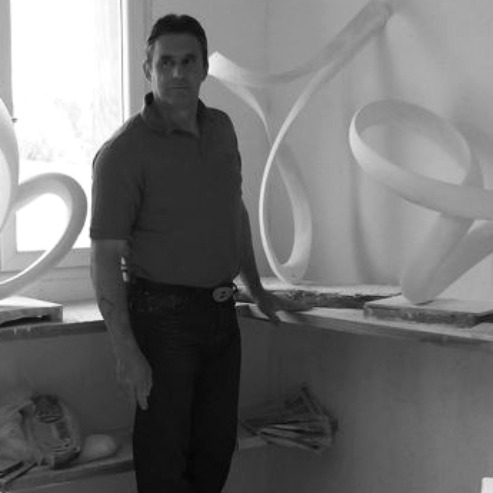 Edouard Hervé’s sculpture is an aesthetic revelation. Indeed, playing with talent between balance and imbalance, he manages with an expressive delicacy to translate in the material lines of forces with nervous and incisive edges bringing to each of his realizations a reality which can only seduce. It is as if these lines materialize gestures in space and that they are inhabited by the spirit. Indeed, an essential quality of this artist is to succeed in expressing palpable and communicative emotions by basing himself on a geometry at the same time rigorous and poetic. What gives essentiality to his works is that he skilfully plays with the forms, like a magician, managing to concretize harmonious and evocative visions.

Although Hervé claims to be “self-taught”, I think that his experience as a plasterer was a kind of school for him and made him realize that plaster, this material so much used by sculptors, allowed him to access forms that only asked to exist and to become vectors of transmission of an aesthetic truth. It is by measuring himself against others in the various shows in which he participated, by initiating a research which made him discover inexhaustible worlds and possibilities, that he turned resolutely towards this difficult and demanding art that is sculpture. It is certain that the encounter with the Marais gallery was also decisive: he became aware, professionally, of the impact of his work and the interest it aroused.

Success was quickly achieved and his exhibitions at the Marais galleries in Paris and Saint-Malo were an effective trigger for this artist who has kept the promises of his early years. He also exhibits abroad and has received numerous awards and distinctions throughout his career. But, if he appreciates the positive judgment of his peers, his life is in his studio, the true heart of his work, and in the elaboration of these light and majestic forms inhabited and animated by his will and his desire.

It is up to us to enter his universe and to go and meet a symbolism devoid of any dogmatism.